The first part of Switched On!'s contribution to Japan Music Week 2010 is this post-punk and new wave event, featuring some of the finest new bands in Tokyo, as well as international guests The Stingrays, who were among the founding members of the Bristol punk and new wave scene in 1977.

Japan Music Week wristband holders can get in for half price (1000yen) by showing their wristband at the door.

Bands:
- The Stingrays: Leading figures in the first generation of Bristol punk and new wave through their work on the Heartbeat and Fried Egg labels, The Stingrays are often described as Bristol's Ramones, although their sense of humour and less rigidly punk style makes perhaps The Rezillos a more apt comparison.

- She Talks Silence: Gorgeous, lo-fi post-punk, with sweet, whisper-voiced melodies drenched in feedback, recalling elements of The Jesus & Mary Chain and The Vaselines.

- The New House: Wide-ranging, psychedelic tinged indie music from Tokyo, as well as being veterans of SXSW and touring partners of the Vivian Girls (http://www.myspace.com/thenewhousetokyo).

- Anisakis: Garage rock influenced post-punk, reminiscent of classic psychedelic era bands like The Monks, as well as the kind of edgy, post-Wilko Johnson guitar style of the British post-punk era.

- Umibachi: Born out of the ashes of Tokyo's late 90s new wave revival, Umibachi retain that generation's B-52's and Devo influence, wedding it to psychedelic and dance influences.

DJs:
- Sumire (Twee Grrrls Club/Violet & Claire): As well as being the founder of Tokyo's premier all-girl DJ team, her unerring, under-the-radar instinct for great music means Violet & Claire label was the first place to discover both The New House and She Talks Silence. 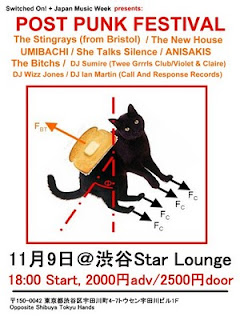