It's anniversary time again for C.A.R. with the fourth annual Koenji Pop Festival, as usual featuring a wealth of musical debauchery amid fountains of low quality alcohol. In total there will be ten bands performing, including three from the southern rock and roll Eden that is Kyushu, augmented by a wealth of local talent.

Along with a number of familiar faces like MIR, tacobonds, The Mornings, ruruxu/sinn (pronounced "lulue-shin"), Grouncover. and Zibanchinka (地盤沈下), the event will also feature Fukuoka instrumental trio Me I Sashimi (ミー愛さしみ), the fierce and sexy Hemay (悲鳴), the glam rock/kayoukyoku stylings of Momoiro Ageha (桃色アゲハ), not to mention old co-conspirators Abikyokan, who return to C.A.R. to dazzle you with their science.

Info and artist links below: 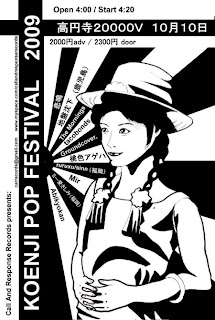