Call And Response's latest release, the debut album by Kagoshima garage/postpunk quartet Zibanchinka, is now available in a limited release. Currently it can be bought from Enban in Koenji, and I'll be introducing it to other independent outlets over the next few weeks. A wider release will follow as soon as possible, but in the wake of the March 11th earthquake, the distributor is having an extended attack of jitters over a band name that means "subsidence". 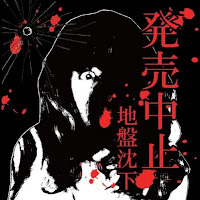 The album is called "Hatsubai Chushi" ("Stop Sale") and features 15 tracks for 1,800 yen (plus tax). I'll post new details of stores where the CD is available as they come, and for those unable to get hold of it via Enban or its web site, here's the song "Watashi no Nakami wa Almond" to whet your appetite:

And here's the song being performed live at a Call And Response event in Tokyo a couple of years ago: