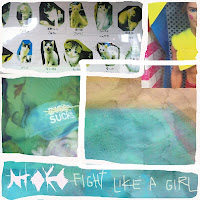 To coincide with his return to Japan for the summer, Slovenian electro-hip hop musician N'toko has a new EP available for free download via Call And Response Records, featuring five new songs recorded over the past six months. The Fight Like a Girl EP evolved out of a series of experiments with new production ideas and the result is a work with a more laid-back sense of exploration and adventure, smearing his characteristic synth-based sound across the songs like Nutella over toast one moment, forcing it through brutally tight bottlenecks the next. As with most of N'toko's English-language work, the lyrics duck and weave, spinning through a chicane of stream-of-consciousness wordplay, sci-fi imagery and surreal collages of seemingly random images, all combined with a sense of wit and playful disregard for convention.
All music by N'toko, except "Snob" by Volatile. All vocal recording, mix and mastering by Igor Vuk, except "Snob" mixed by Volatile. Released by Call and Response Records.
Download the entire EP via Mediafire: http://www.mediafire.com/?pk4c1wkgtbd6c1x
N'toko
Facebook: https://www.facebook.com/ntokomc
Twitter: https://twitter.com/ntokomc
Blog: http://ntokomc.blogspot.com
Posted by dotdash at 12:47