Some people might over the last week have read about the fire in an izakaya in the Tokyo suburb of Koenji that claimed four lives last Sunday morning. Certainly for those of us who live in and around Koenji this has been enormous news and of more than a little importance in the music scene.

Koenji is famous as a music district, with way more than its fair share of live venues, as well as record shops catering to pretty much all tastes, from hardcore punk, to reggae, to fucked up experimental improvised music to old 1950s and 60s singers. Many of the residents are musicians or otherwise involved in the music scene, and Ishikaritei, the izakaya where the fire happened, was a central place in Koenji's music scene, as much part of the scene's fabric as venues like 20000V or shops like Enban. 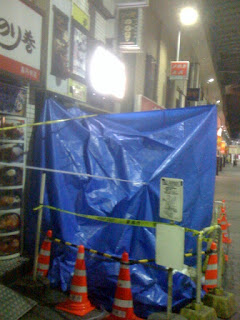 Positioned on the second floor of the building that also includes the punk venues Gear and 20000V, Ishikaritei was a regular venue for the after-gig drinking that often followed gigs. The food was cheap, the staff were friendly, easygoing people, and it always had good music playing, usually a mixture of 60s and 70s rock and pop. The staff there clearly liked music and were always accommodating to musicians with their cumbersome bags full of equipment and frequently drunken behaviour.

Over the past week wherever I've gone, any time I've met music scene people, the conversation has invariably come down to the fire. All that has been published about the two staff members who died is that they were a man in his sixties and a man in his forties, but in any case it's clear that the people killed included people we knew, at least tangentially. These were people you would walk past in the street and recognise. Possibly people you'd smile and nod your head to them.

The fire occurred at about 9 A.M. on Sunday morning, and one of the most sickening things about the past week was hearing the tutting, clucking insinuations of the media talking heads as they ask what people were doing out drinking at such a time. There is something decadent, seedy, morally bankrupt about it, they imply. Those four people who died had somehow brought this on themselves.

Ishikaritei's customers weren't just musicians though. In the evening, it was just like any normal izakaya, with couples, people having a post-work drink, groups of friends. From ten or eleven o'clock the musicians started pouring in, and then from about 3:00 or 4:00 A.M., like any other izakaya, it would become quiet. After 5:00, however, it would get busier again as the workers on night shifts came by for an after-work drink. These were the workers from other izakayas, the girls from the hostess bars, the people who keep the town running until morning for everyone else.

This urge to seize on any aspect of the abnormal is perhaps understandable when trying to deal with a senseless tragedy like this. After all, none of the normal 5:00 A.M. izakayas burned down, just the freaky 10:00 A.M. one. It still fills me with anger though. The building, like many in Koenji, is an old one, and fire is an ever-present danger for an izakaya specialising in yakitori (grilled chicken), and something should be done to ensure that these old buildings are made safer, but it's hard not to feel that the culture as a whole is being victimised by these insinuations.

In Japan there is a tradition after an incident like this for people to leave offerings at the site. Flowers, of course, but also other small gifts. There's a kind of pathetic irony in the contrast between the magnitude of the event and the commonplace nature of the offerings, but within that is something deeply moving. 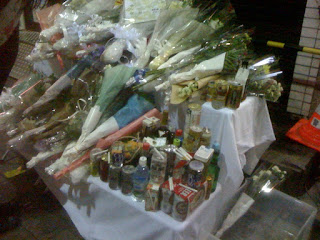 There's a review of Hyacca's new album Hanazono on Nippon Rock. If you don't trust me, as the owner of Hyacca's label, that it's ace, please trust this neutral observer.

For potential buyers, C.A.R.'s own release info is here.
Posted by dotdash at 03:08 No comments:

Fashion Crisis is back with all the usual favourites as well as special guest DJ Shingo Nakagawa, infamous as the bass player in Tokyo's most fearsome no wave noiseniks The Mornings. Tuesday is a national holiday, so there's no excuse not to let loose and disco down.