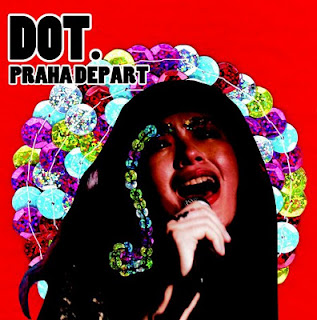 Praha Depart have a new EP/mini-album called Dot. available exclusively for fans on these European dates (Japan release is pencilled in for early next year). By way of a preview, here's the song Portrait Man:
Praha Depart: Portrait Man by callandresponse
Posted by dotdash at 14:08 No comments:

Can't believe this slipped through the blognet, and this will be old news for anyone who follows me on Facebook or Twitter, but there's an N'toko promotional video out there now, directed by the magnificent Matt Schley and filmed at the wonderful Koenji One, home of our monthly Fashion Crisis parties.
Matt and I came up with the concept, and we crammed the thing full of self-indulgent Easter eggs. I'm in there, looking fatter than I would have liked, as the unimpressed DJ. Matt himself and my Fashion Crisis collaborator James Hadfield are playing an unusual version of Othello, Trinitron vocalists Kaname K and Zana make an appearance reading a series of books and smoking a series of cigarettes respectively. Also making a brief appearance is Tokyo ambient noise weirdnik Dr. Daddy, as well as disco commander Harumi Ito, so thanks to all of them for their help.
Also a reminder that from next week, N'toko will be on tour in Europe with the excellent Praha Depart. There are still lots of free dates thanks largely to the apparent impenetrability of the Berlin and Paris live scenes and the flakiness of one or two promoters, so any last minute booking offers in Western Europe are gratefully received.
Posted by dotdash at 18:35 No comments: 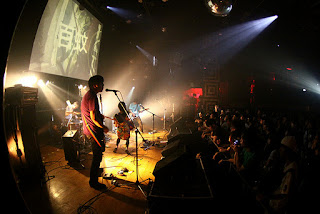 Over the next few days, Fukuoka postpunk disco monsters Hyacca will be in Canada as part of Steven Tanaka's Next Music From Tokyo tour, along with Natsumen, Chiina, Merpeoples and Akai Ko-en. Details on the tour can be found on the NMFT web site:
Oct 13 Montreal @ Divan Orange (w/ Devil Eyes)
Oct 14 Montreal @ Club Lambi (w/ tonstartssbandht)
Oct 15 Toronto @ the Rivoli
Oct 16 Toronto @ the Velvet Underground (All Ages)
Oct 18 Vancouver @ the Biltmore Cabaret (w/ the SSRIs)
Posted by dotdash at 18:16 No comments:

October's Fashion Crisis features the hard-riffing sounds of Harajuku butterfly catcher Ryotaro Aoki (of Kulu Kulu Garden fame) and Portuguese postpunk party sounds courtesy of the mysterious yet effervescent Poet & Fabric. The regular crew will be there with more of the usual rainy 80s Anglo-jangle (Ian) and post-dubcore Afro-grime (James). 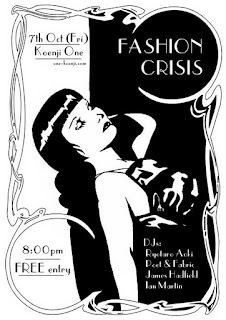