The distributors are still holding the Zibanchinka album back from a full release because of concerns over the band name in the wake of the March earthquake ("地盤沈下" means "subsidence"), but they've agreed to allow Tower Records in the band's home town of Kagoshima to stock it and they've responded with this lovely display: 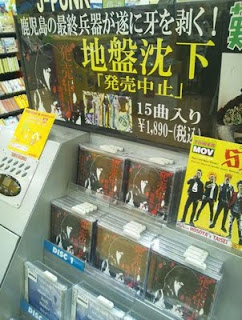 Buyers in the rest of Japan can get hold of the album online from a few sources:
Posted by dotdash at 17:31 1 comment: 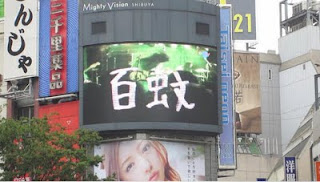 Courtesy of Style Band Tokyo, whose 15-second ad is currently running on one of the big screens at Shibuya's famous Hachiko crossing, here's proof, if any is still needed that Fukuoka spazz-punks Hyacca are better than the girl who came 8th in AKB48's latest senbatsu election (assuming "better than" is covalent with "positioned physically above").
Posted by dotdash at 16:56 No comments: 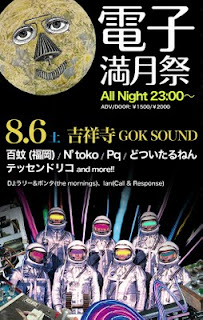 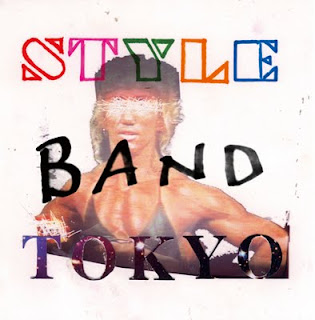 Some differing views on K-Pop/J-Pop

Was pointed towards this by a friend today and it seems like my last Japan Times column has provoked a lot of comment over on a a popular Livejournal group recently. They don't accept comments from non-members unfortunately, but I wouldn't want to come across like the kind of journalist who refuses to engage with people who dare to disagree with him online, and some of the criticisms on there are points that are worth responding to. Obviously the comments below are open to anyone who has anything to add.

First, my comments are of course a personal opinion. Strange Boutique is a monthly column and the purpose is for commentary. I'm lucky enough that there is someone at The Japan Times who thinks my subjective opinions are worthy of attention, but obviously not everyone's going to agree with me.

Secondly, while I get some leeway with my articles, they are published in both the paper and online editions of the paper, so I have to stick to a word limit, which means I can't discuss every aspect of a topic. I have to draw the line somewhere, which is why being able to continue the discussion online is such a boon.

As for the big point about the idea of Girls' Generation "saving J-Pop" or whatever, I think this is important. J-Pop has historically moved forward in big, juddering lunges about once every ten years, usually influenced by some behind the scenes realignment of the industry (Nabepro in the 60s, Star Tanjou in the early 70s, Dentsu and the "CM idol" in the 80s, and Avex in the 90s, among others) and usually these shifts have been accompanied by musical influences from outside (jazz, eleki, disco, new wave, Eurobeat, etc.) The reason some music commentators are focussing on Girls' Generation so much now is because it feels like one of these periodic realignments is overdue and Korea looks like it might be the staging ground for a new influence entering into the J-Pop mix.

If this does happen, I would guess that the result won't be Japanese pop that sounds exactly like American music. It'll be something new that fuses elements of both. As when 60s singers in Japan built early careers off covering Western pop hits, before local songwriters started creating their own original takes on these influences, I guess something like that might happen in the wake of Girls' Generation.

Yes, this is partly because I'm a music writer. I need constant change in music because I need new things to write about. As a music fan I want these things too though. Lots of people seem to like J-Pop as it is because it differs from American pop, but for people here in Japan where this is all we get, something with an American influenced sound getting as popular as Girls' Generation have is quite exciting.

As for some of the other smaller points, yeah, I debated with myself whether to call Immi an idol or not. I have a word limit and didn't want to drive myself up a new path trying to describe her so I went with a quick, easy descriptor. She's in a similar category to Meg though, which is often referred to as "oshare idol" in Japan, so I'm sticking by it. I understand why people might disagree though.

As for my label, I always try to keep it separate from my writing about music (apart from this post, natch -- my general music blog unfortunately can't handle comments at the moment). I'm certainly not jealous of AKB48 or someone for being more successful than Zibanchinka!
Posted by dotdash at 09:10 No comments: