I skipped mentioning the last Fashion Crisis due to not having a computer, but it was a pretty spectacular double feature with James taking charge of the Tokyo party at our regular venue of Koenji One and me hooking up with CAR stalwarts Miha and Zana in Ljubljana for our first European edition of the party. Disco madness ensued.

Anyway, we're back to normal this month with James and I both playing at One, backed up by friend of the event and minimal wave disco infiltrator Komlaski, as well as Soh from 80s-influenced psychedelic punk noise terrorists Hysteric Picnic. Appearing live will be Loser & Ribbons, the latest project of Her/Yamaco mastermind Noriko Yamada. 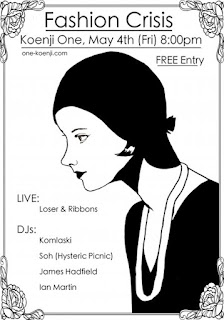